It is usually an Environmental Health Officer (EHO) from the local council, or a Health and Safety Executive Inspector that demands that a company obtains an inspection of its cantilever racking by a ‘technically competent person’. Cantilever Racking is a storage system usually utilised to store long and irregular or even awkward shaped products that cannot be accommodated in Pallet Racking. 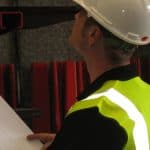 Often the inspection reveals “Red Risks” which require immediate offloading of those racks or locations. Typically the response of the client when asked to carry this out, is that the situation has been “like that for years” and that “nothing has happened yet”.

Often this is true and therefore it is important to understand why racks and components that have been overloaded or damaged have not failed and resulted in a collapse. There is usually more than one reason for this and a combination of factors are in play, preventing a dangerous occurrence: 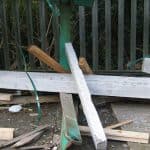 If, however, the combinations of factors that have prevented the rack or component from failing change and create an adverse overall effect, then the conditions for collapse to occur may all be in place and then sudden failure can result.

The rack inspector in reality is not being ‘too fussy’ when issuing Red Risks, they are simply highlighting that the luck that has been enjoyed preventing failure of those components or racks may at some time run out and then…. Watch out! It may be too late!